Perhaps the best way to pay tribute to the disruptors and provocateurs of the Ballet Russes is with our own equally unabashed and avant garde approach.”
- Erica Gionfriddo

Re-(w)Rite began as an invitation from the Billings Symphony to collaborate on their 2019 season performance of Stravinsky's Rite of Spring. Knowing how challenging the score was for the symphony and the power in which the music alone carried, Krista wanted to keep the focus on the music, and respond to the historical context of the piece itself. Rather than filling the stage with dancers, in a modern retelling of an historic work, she envisioned a single soloist instead. A dance artist capable of holding the frequency of such an iconic work in their movement and rather dance for the symphony, partner with them.

Re-(w)riting such an iconic piece of music and performance did not mean rejecting historical contexts; as a dance scholar I am well versed in the lore of the Rite of Spring and its many iterations. But we did turn away from past narratives that no longer serve us; consciously stepping toward a new, yet unknown future. This meant not a re-stating of the music, but a “going with” that allows me to re-embody the power in Stravinsky’s chaos without drowning in it. Part of my practice will be to let the symphony move through me, not simply move with them.
​
- Erica Gionfriddo

I am in a space of reimagining myself as a dance artist; of breaking open and breaking through past and future forms of expression, discipline, and pleasure. This is wholly destabilizing and also empowering, particularly when seen so clearly by a mind like Krista’s. With this process, in the simplest of terms, she presents ideas and I physicalize them. Whether you might call either of us a choreographer is irrelevant. What I’ve developed, at Krista’s insistent and unwavering belief in my abilities to reinvent, is an improvisational practice demanding my utter devotion to several inquiries at once. What will transpire will be a physicalized dialogue between our months of theoretical discussion, my personal grappling with a new movement language, and contending with the (musical/dance/historical) lineage of Stravinsky’s iconic work. The container making all of this possible will be my ability to respond in real time to the musical artists I share the stage with. This is not a staging of a dance set to music. This is an embodied practice.
- Erica Gionfriddo 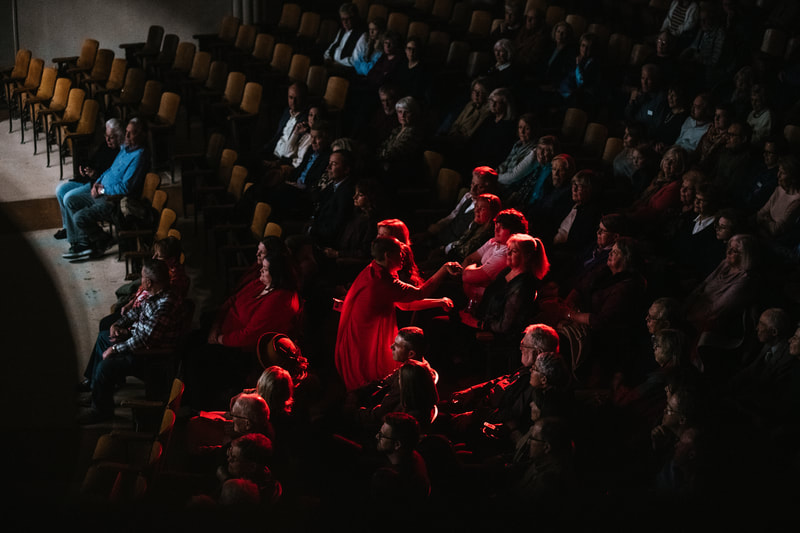 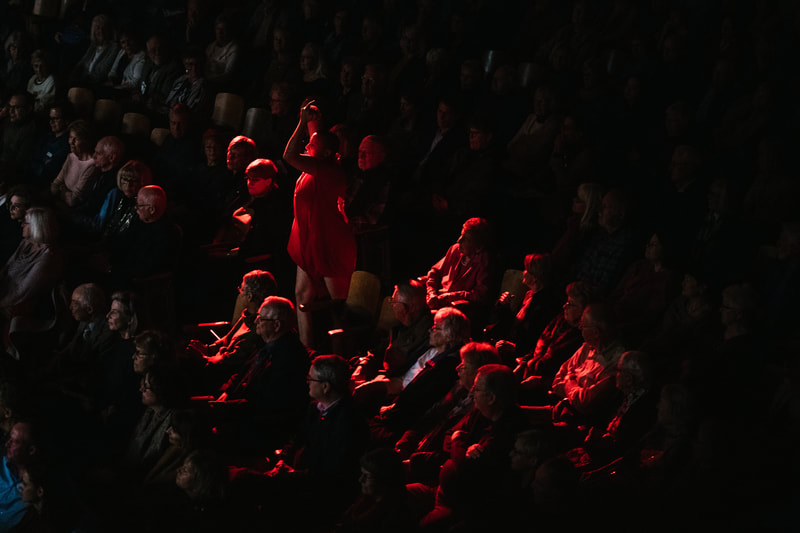 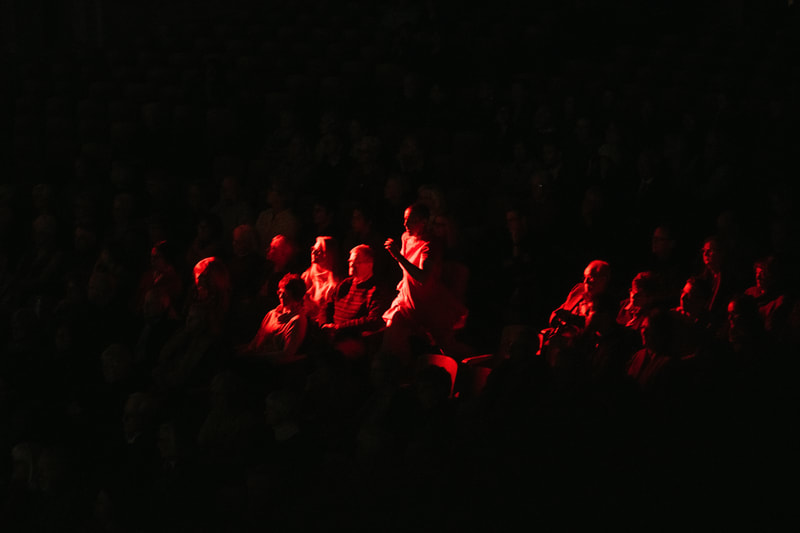 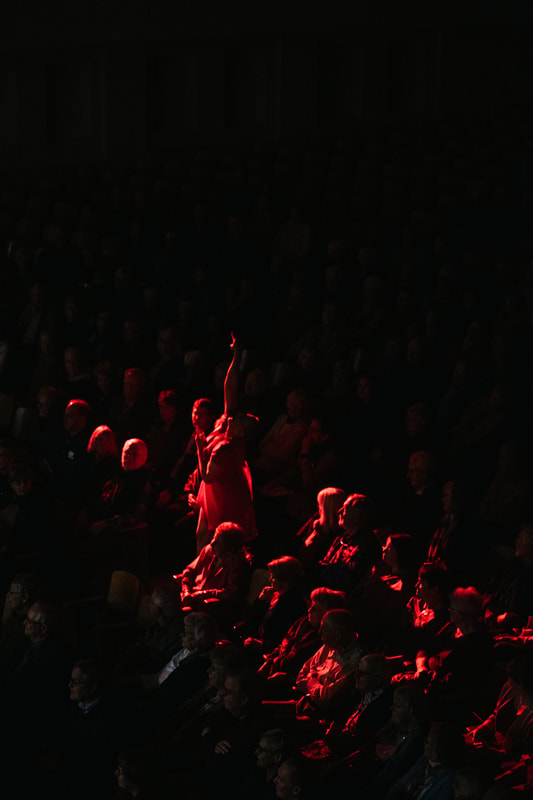 The Rite of Spring premiered in 1913, and was Stravinsky’s third full-length ballet commission for the Ballet Russes. Stravinsky worked with dramaturg Nicholas Roerich, a Russian expert on folk art and ancient rituals, to tell the pagan tale of the advent of spring and the sacrifice of a young girl who dances herself to death. The ballet, originally choreographed by Vaslav Nijinsky, paired with Stravinsky’s orchestral score, caused disruption and uproar among the audience members. Descriptions of the score include “frenetic,” “jagged,” “brutal,” and “tender.” What remains, is a dissonant (and culturally) challenging work for both dancers and musicians to execute. Rite of Spring, separate of the ballet, symbolically foreshadowed the unrestrained horrors of the Great War, World War I, and the sweeping cultural changes that followed. This is one of the many points of entry artists Krista Leigh Pasini (as dramaturg) and Erica Gionfriddo (as dance artist) investigated in their performative work and while both artists approached Rite of Spring as a document of history, a time capsule from 1913, they also re-contextualized their work through current contexts and future narratives. 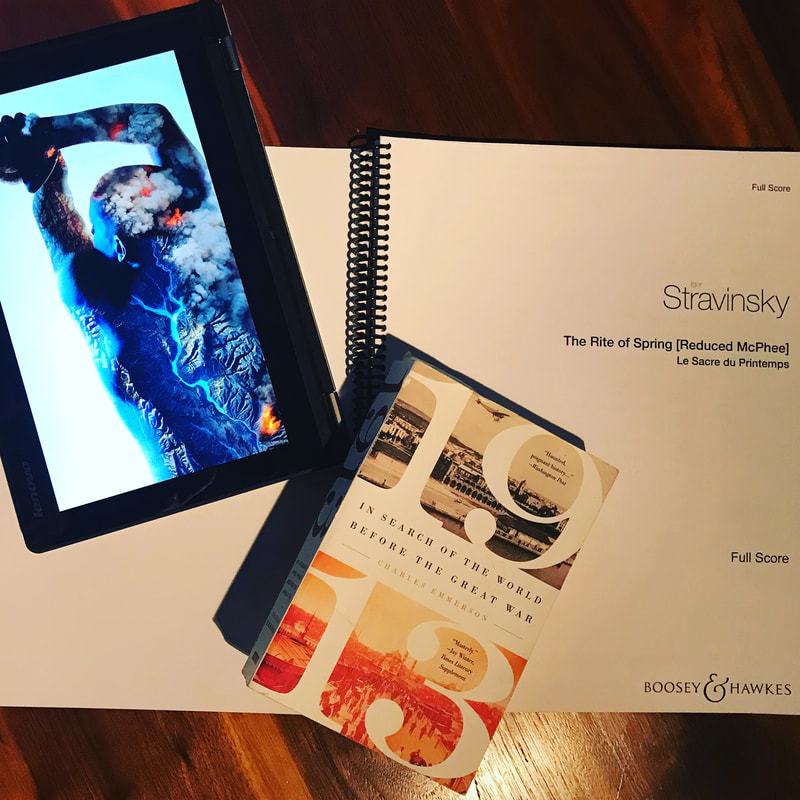