What a lively evening of entertainment it would be to sit in a debate between Ruth Bader Ginsburg and Emily Post. Stand back, moderator. Things just got positively combustible!”
- Dina Brophy after attending a rehearsal for Restrictions Apply [void where prohibited]

Exploring historical and present conversations on the expectations of women, Restrictions Apply [void where prohibited] is a provocative performance art work performed by multidisciplinary artist Billie Parrott intended to spark dialog on the many shapes women conform to, adopt, reshape, and discard. 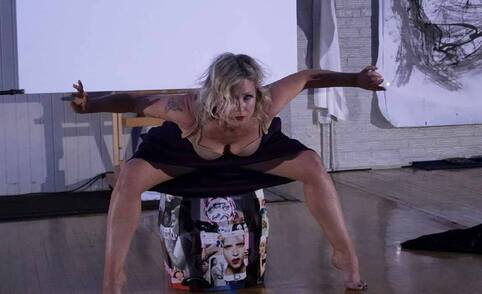 Krista made a conscious choice in this process not to ask Billie to embody or mimic Krista's source material from the Mourning Cloak project, but to use what they co-created as a tool kit to develop what would become a piece born from Billie's own movement signatures. Before they began in the studio, Krista sent the artist a packet of items that included excerpts from Emily Post’s Etiquette book, images relating to the Lamentation solo by Martha Graham, information about the Mourning Cloak butterfly, an audio montage of men interrupting women, and a video sample of Krista's movement. Their first rehearsal was shaped around Billie's response to the material and how she identified with it in her life, as a full-time working parent. From that dialogue, Krista cataloged what resonated into a performative sequence and a sound design and they began threading material together. This process was conversational as much as it was defining the movement gestures. Krista inserted a reading from the Etiquette book, and Billie became acquainted with the her own  metaphorical qualities of mourning cloak. Eventually the material settled into a choreographed sequence, but much of the material was built so that it could be reorganized or improvised depending on when and where it was performed. This also allowed Billie Parrot additional permission to be present to how she embodied the work each time, providing space for her relationship to the performative material to change and conversely, allowing the material to change with her.
Pedestal

The pedestal Billie stands on references the late Justice Ruth Bader Ginsberg's statement on occupational equality as well as a collage on gendered violence, misogyny, sexism, and body politics. Multi-media artist Mike Pasini, spent several weeks curating images together from magazines overlapping with the words from Emily Post's Etiquette, Rebecca Solnit's Men Explain Things to Me, and Ginsberg's closing statements from the 1972 Supreme Court case that defined her career.

Laws which disable women from full participation in the political, business and economic arenas are often characterized as ‘protective’ and beneficial. Those same laws applied to racial or ethnic minorities would readily be recognized as invidious and impermissible. The pedestal upon which women have been placed has all too often, upon closer inspection, been revealed as a cage."
- Ruth Bader Ginsberg 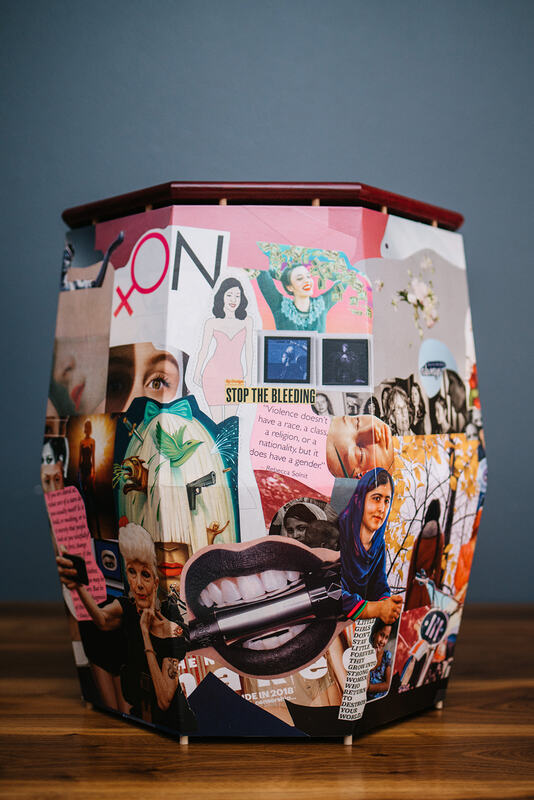 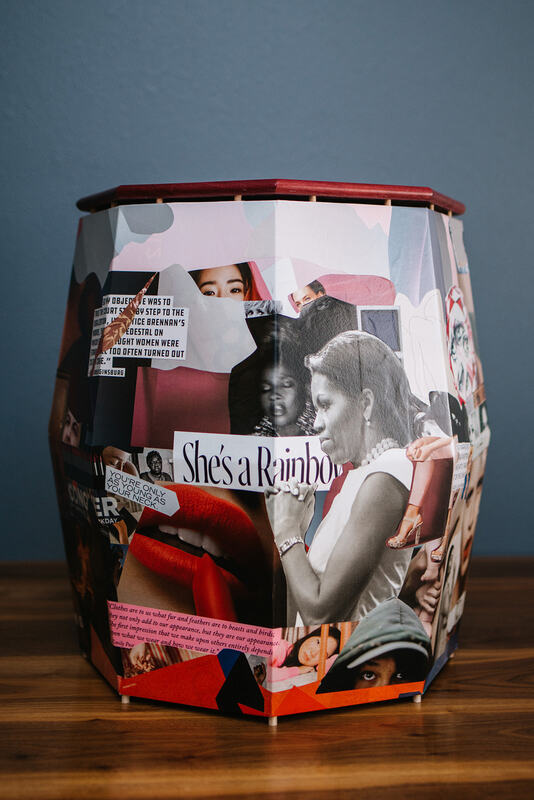 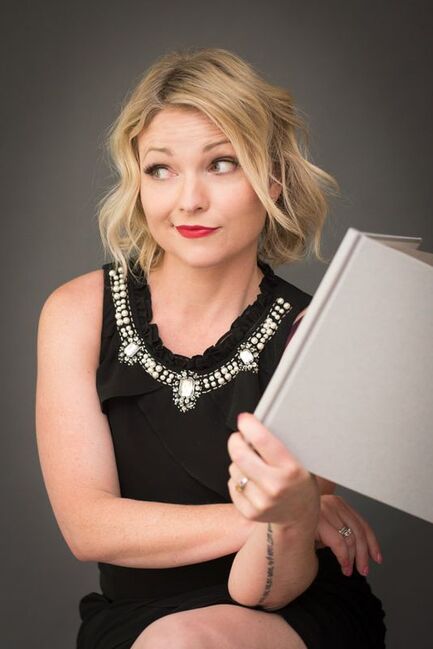 The perfect Secretary should forget that she is a human being and be the most efficient machine that she can possibly make of herself – in business hours. Her object is to coordinate with her employer’s endeavor, and not make any intrusions, which would be much more likely to affect him as hurdles than as helps. She should respond to his requirements exactly as a machine responds to the touch of a lever or accelerator. If he says, “Good morning” she answers “Good morning” with a smile and cheerfully. She does not volunteer a remark – unless she has messages of importance to give him. If he says nothing, she says nothing. In fact, when she notices his preoccupation she waits, if possible, holding back irrelevant messages until he has finished the letters he wants to dictate or whatever business it was that made him ring for her.

A woman who goes into an office because she thinks herself pretty and hopes to meet romance in the form of her employer or at least to rise quickly because of her physical charm, has clerkship and chorus-work mixed. Sex is one thing that has no place in business. Much as a man may admire a pretty or magnetic or amusing woman in his leisure hours, in his hours of work he wants someone to help him with that work, and the more help she can give him the more he values her and he more salary he is willing to pay. Naturally he likes one whose personality is attractive, rather than one who is strikingly the reverse- but business personality and leisure personality are two different things. […] Of course, every man likes a woman that is beautifully neat, impersonal, efficient, and polished, just as he likes a motor that is valve-ground and shining and ready to go any distance without boiling over – or breaking down because of broken parts or rust. A successful business personality has as its first attribute, efficiency.

​Ticket of Admission
​
Clothes are to us what fur and feathers are to beasts and birds; they not only add to our appearance, but they are our appearance. The first impression that we make upon others entirely depends upon what we wear and how we wear it. Manners and speech are noted afterward, and character is discerned last of all. In the world of smart society clothes represent our ticket of admission. A woman may be stared at because she is indiscreet, or because she looks like a left-over member of the circus, or because she is enchanting to look at. If you are stared at, what sort of a stare do you usually meet? Is it bold, or mocking, or is it merely that people look at you wistfully? If the first, change your manner; if the second, wear more conventional clothes; if the third, you may be left as you are. But be sure of your diagnosis of this last.

A focus on this project was how history intersects with current contexts and how does a book on etiquette, published in the 1930s, influence or compare to some of the conversations and expectations that exist nearly a century later. Krista layered a sound design that traveled through these inquiries referencing 1960s advertising and 2016 television interviews. The historical material inspired Billie to pull out performative references of Lucille Ball, the shows Bewitched and I Dream of Jeannie, as well as the aesthetics of beauty pageant culture.
​The satirical and comedic approach set the stage for Billie to respond sincerely, and personally, to the sound material Krista arranged at the end as a counterpoint. The piece drifts into more solemn reflections that pull from live poetry read by Billie's daughter, and ends with a compilation of sexist media interviews. Billie remains on stage for the full piece traveling through the arc of emotions as she performs. 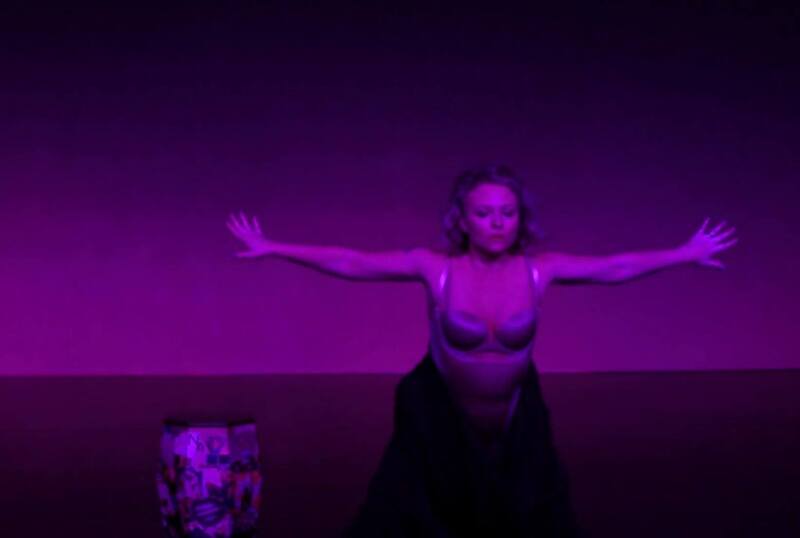 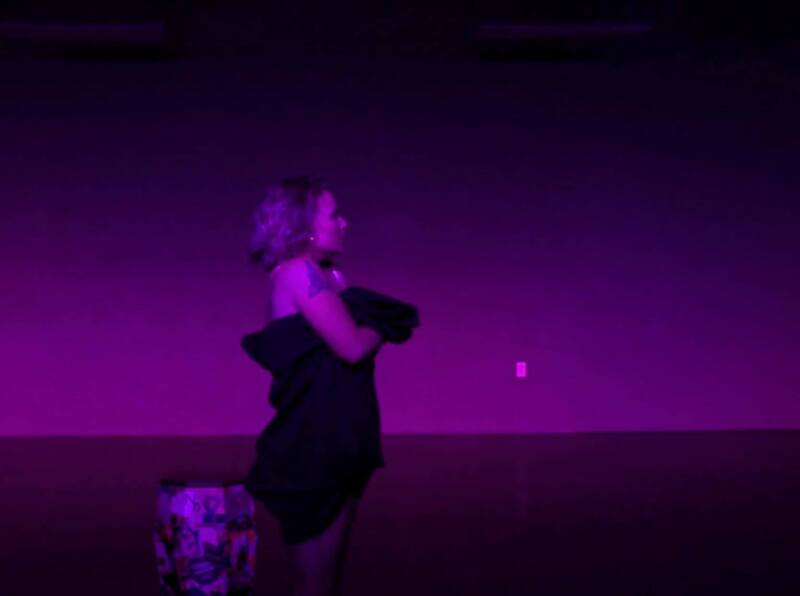 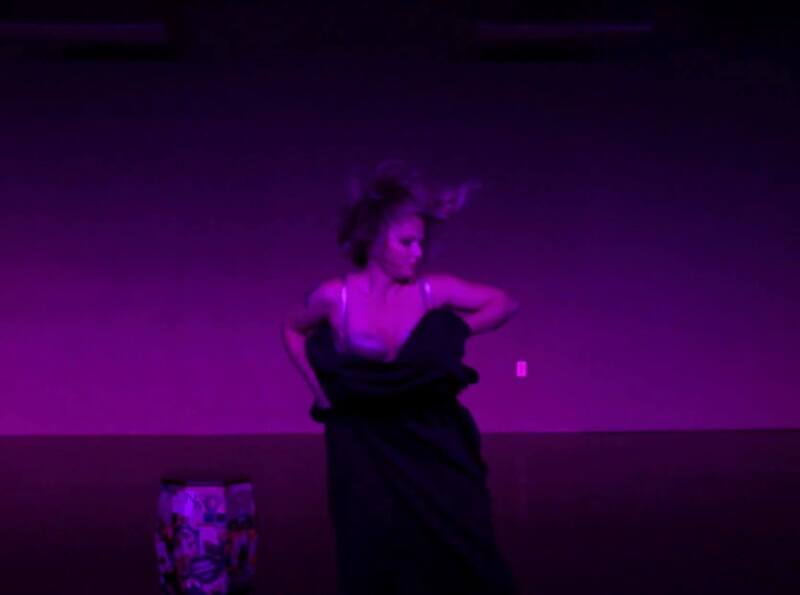 The male typically is the dominant role, it’s not antithesis, it’s a complimentary role. … The bottom line is this, ladies, there is nothing more than a woman wants to hear is that how pretty she is. … She was calm, she was charming, her hair looked to be cosmetic, her hair looked great, she looked great. … Women do earn less in America because they choose to. They would rather go their daughter’s piano recital than stay all night working on a proposal. So, they end up earning less … They’re less ambitious.
- Compiled statements from TV interviews featuring Gavin McInnis, former leader of the Proud Boys. 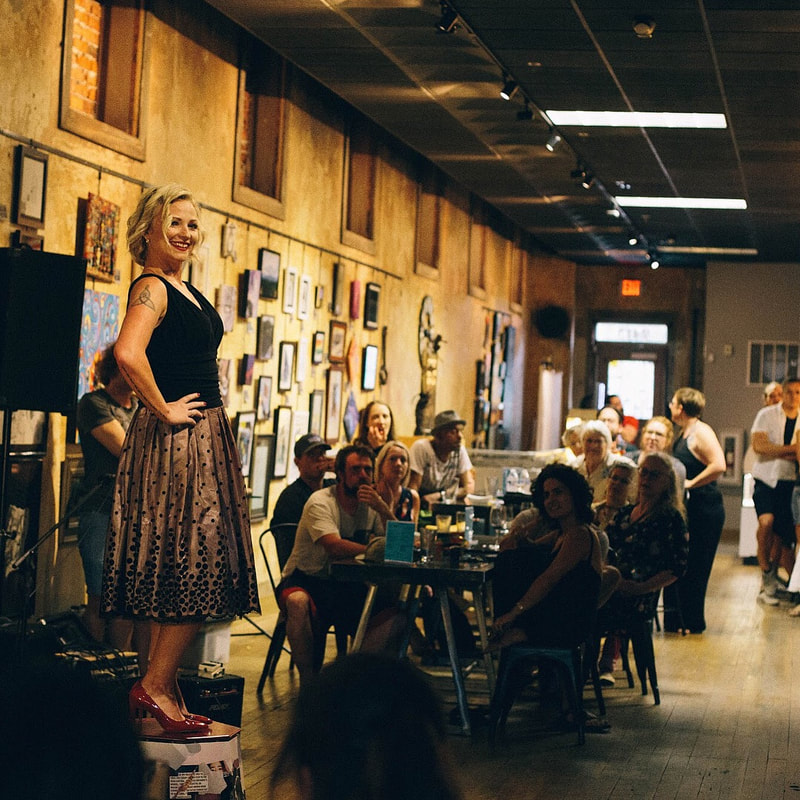 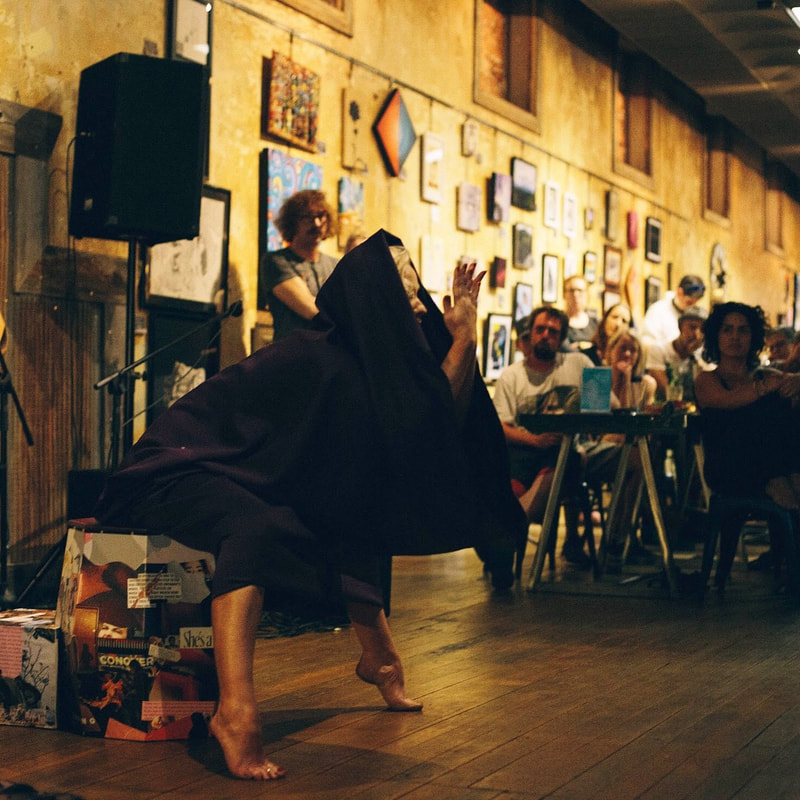 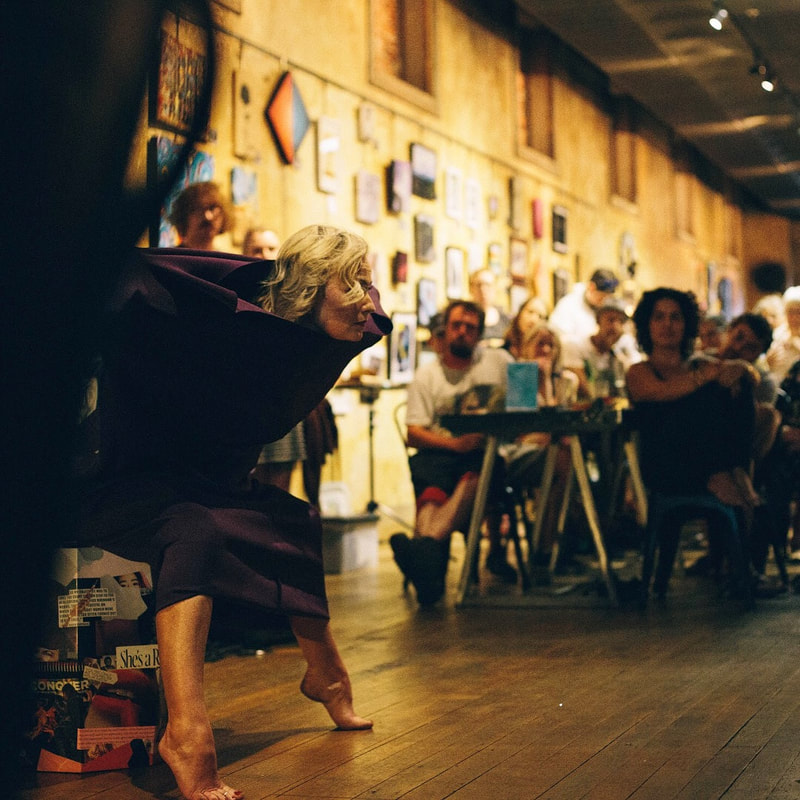 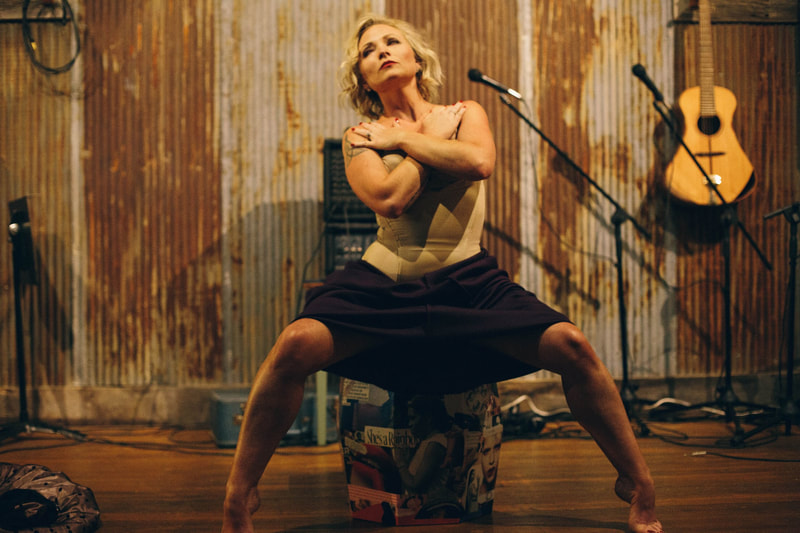 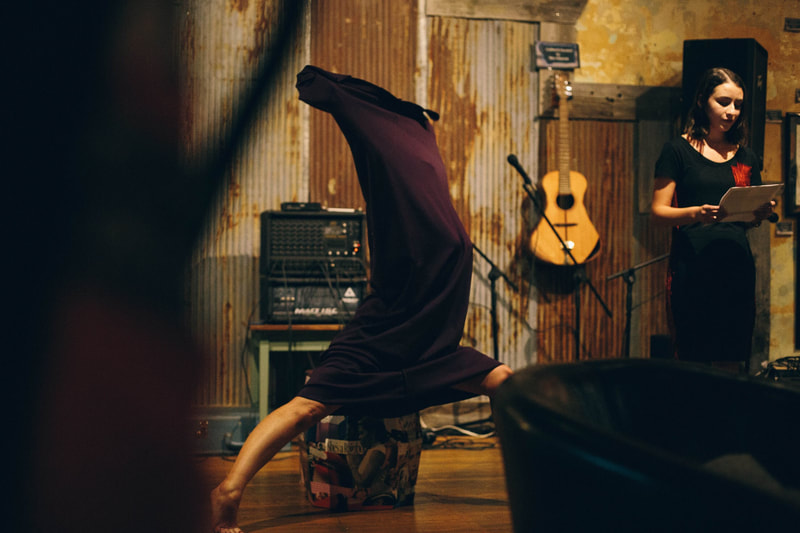 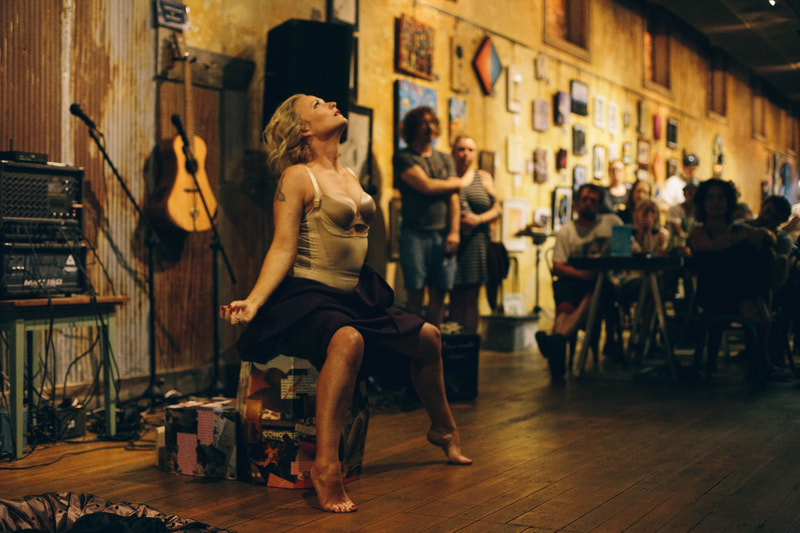